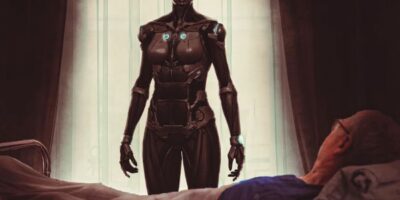 “Hey Gavin, grab your Dad’s rifle” shouted Riley as he barged his way into the barn and slammed his backpack on the floor raising a small cloud of chaff and dust that rose in the shaft of light beaming through the open barn door. “I’ve got something for target practice.” Gavin, rose from a tattered old lounge chair, tapped on his smartphone and put it in the pocket of his jeans. Gavin pushed his glasses up and obediently turned and started heading toward the loft where they hid the key for the gun cupboard. He stopped in his tracks, and his shoulders stiffened. Did he see something moving in the bag? He turned toward Riley, “Wait, uh why, uh what target practice?” Gavin said as he heard a muffled whimper. He felt the color leaving his face. Riley bent down to his backpack, which was still in silhouette.

“Relax.” Riley unzipped the backpack and Gavin squinted as he saw what looked like a tiny foot. Gavin was anything but relaxed and felt his face scowl up. Riley reached inside the bag and grabbed what looked like a newborn baby by a leg. Tiny arms and legs gyrated in a slow rhythmic motion.

The cry was a distorted sound and seemed louder than it could have been. Then Gavin’s eyes adjusted to the light, and he relaxed slightly. He was looking at one of those robot babies that they gave to girls at school. A dusty white ball of fur ran over, started barking, and wagging her tail. She leaped up, trying to lick the robot but Riley pulled it away chuckling as he did.

“Down Belle, down,” said Gavin, but Belle just kept running around and leaping up at Riley. Gavin walked over and grabbed Belle by the collar. He tied her to a leash that was hanging near the door.

Gavin poked his head out of the door. His eyes darted side to side. Gently he closed the door though no one within earshot would have heard it slam.

Gavin held out his hands. “Let me have a look at it.”

Riley passed it to Gavin, the face was rubbery but had the proportions of a newborn baby. It reminded him of his sister when she was a baby. The eyes seemed to follow him – they were following him, and they blinked. This one was somehow more real than the one he had seen before, yet somehow creepier.

“It’s supposed to stop crying if you give it a bottle.” Gavin looked with anticipation at Riley. Riley grabbed the bottle from his bag, smirking.

Gavin gave it the bottle and the jaw started moving with a faint buzzing sound that he could barely hear over a recording of sucking. After a while, it seemed to be satisfied, yet it still had a frown. Gavin removed the bottle.

Riley motioned for the robot, and Gavin gently passed it back. Riley snatched it and pressed something on its back.

It made beeping sounds like a dishwasher that had finished its cycle, and the robot became frozen and silent.

“Why do you want to shoot it? That’s just creepy.”

Riley laughed. “It’s not like it’s real or anything. You shoot rabbits, don’t ya?”

Gavin scowled “That’s different. Where did you get it?”

Riley scrolled his eyes up –. “I nicked it from school.” He thrust his chest forward slightly and pointed at the gun cupboard, “Come on, just grab the riffle already.”

“But why do you want to shoot it?”

“It kept me awake all night.”

Gavin noticed that Riley’s eyes were a little red, he screwed up his nose. “You had it in your home last night. Why?”

“I vill ask der questions. Just get the gun.”

Gavin sighed. “I don’t have any bullets.”

“I’ve got some bullets, but I thought your dad has boxes of them in the cupboard.”

“Yeah but they’re all sealed, and Dad would know if anyone used them. Anyway, someone will hear it.”

“No one’s going to hear it. Your nearest neighbor is that old Mr. Harris, and he’s deaf.”

“His dogs will go nuts.”

“His dogs go nuts all the time for nothing.”

“What if someone comes home.”

“You told me that they wouldn’t be back from the city until Tomorrow. Remember?”

“They come back early sometimes.”

Riley rolled his eyes. “Just get the gun.”

Riley raised an eyebrow and grinned. “It would be a shame if Mandy found out that you’ve got a crush on her.”

“Yeah right.” said Riley with a mischievous grin “You don’t come around to my place all the time to see my sister. Anyway, she already knows.”

Gavin shrugged his shoulders and tilted his head down. “It doesn’t matter anyway cause she likes Mark.”

Riley patted Gavin on the shoulder. “I don’t know if she’s that keen on him. Besides he’s weird.”

Riley’s eyes narrowed. “Anyway, what about all those times that I have covered for you?”

Riley let those words hang in an awkward silence.

Gavin’s shoulders slumped then he looked at the loft where the key was.

Gavin trudged toward the ladder and muttered under his breath, “You mean all those times you talked me into doing stuff you didn’t want to do yourself.” He retrieved the key from the loft, and after a lazy stroll to the gun cupboard, he opened it. “You sure you wanna do this?”

Riley hung the robot from the neck on the peppered target with an old piece of rope. “Anytime this decade.”

Gavin returned with the riffle. He was wearing gloves, earmuffs and yellow glasses now. He handed a spare set of safety gear to Riley, who put it all on without hesitation. Gavin then tried to give the rifle to Riley. Riley held up a hand like a cop stopping traffic. “You go first.”

Gavin’s jaw dropped a little. “It was your idea. You shoot it.”

Riley took the gun and loaded it like he was training for the military. “Safety’s off.” Riley tried to hand it back to Gavin. “You shoot.”

Riley groaned. “You’re not scared, are you? It’s a machine. It’s not real. That thing doesn’t feel anything. It is not self-aware.”

Gavin put his hands on his hips, shoulders straight, head back and looked Riley in the eye. “No, I’m not scared, and I know it isn’t real.” Gavin sighed and shook his head. “Riley you’re a great friend but sometimes. Sometimes you’re a real pain. I’m not your slave. I don’t have to do everything you tell me. Especially when it’s a sick idea.”

Belle stood up, barked, and waved her tail. Clang. The shed door swung open, and the room seemed to glow red as Mandy stomped in, looked around and groaned. Gavin gulped softly. Mandy’s eyes were laser beams that glared at the two boys. Her auburn hair swung around as she turned and dashed toward the target seemingly oblivious to the loaded gun. Gavin lunged at the rifle that Riley was holding trying to point it at the ground.

BANG. Cha-ching. Whizz. Tang. Belle barked. Gavin’s heart pounded. He looked around. “Everyone okay?” No one replied, but they were all still standing, and no one was groaning in pain. He looked over at Belle, close to her head was a ray of light that emanated from a hole in the wall.

Mandy shook her head, her nostrils flared. Gavin gulped audibly this time. Mandy removed the robot from its noose then stomped back to the door, slamming it on her way out.

Riley looked at Gavin. “Anyway, what’s the big deal about shooting some latex and wires? You know it’s not real.”

Gavin looked back at Riley, “You don’t get it. Shooting it just seems too weird. It’s – It’s too cruel.”

After a thoughtful pause, he offered. “It’s not because it’s human. It’s because I am.”

No comments to show.